Mastering the art of Jarlsberg cheese

The Jarlsberg-cheeses of the Norwegian cheesemaker, Tine, are renowned and loved throughout the world. We embarked on a trip of discovery into the Norwegian countryside to see how this company held its own in this competitive market. “You must have a genuine interest and a heartfelt passion to succeed in this line of work ”, states cheesemaker, Kjetil Holstad.

The Jarlsberg-cheese is one of the most well-known Scandinavian cheeses, and for the past 60 years has been considered the grandfather of the Goutaler family of cheeses. Even though this cheese is made in the Norwegian countryside, its largest markets, oddly enough, are located on the other side of the ocean.

“America, Canada and Australia are our biggest markets”, says Kjetil Holstad, Operational Director of the Tine dairy factory. “We are especially popular in countries that favour cheddar.” The secret of our overseas success is the distinctive taste of the Jarlsberg: creamy and slightly sweet, somewhere in between Gouda and Emmentaler.

Tine’s Jarlsberg-cheeses are made in a factory located in the district of Jæren in the south west of Norway. The region is well known for its large-scale food production: over twenty percent of all Norwegian food is produced or grown here including milk, cheese and vegetables.

During our car trip of more than 250 kilometres, the landscape changes from mountainous to - compared to Norwegian standards - an uncommonly flat landscape. It was here that the famous glaciers retreated from the Norwegian coastal areas thousands of years ago, leaving behind a flat landscape. When we set our eyes on the thousands of grazing cows, we could fully understand why Tine opted for this location: no other region in Norway can compete with the scale of milk production going on here. 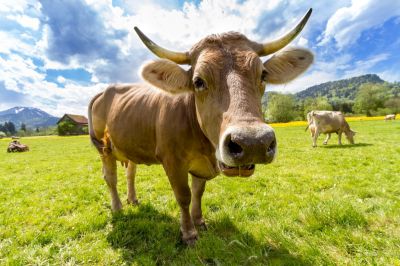 As Kjetil walks us through the factory, we are struck by the enormous size of the complex. Where many factories concentrate on one production line, Tine combines several production processes in one building. From Jarlsberg to mozzarella and from butter to dairy spread.

“All these different production lines definitely make my job more challenging”, explains Kjetil. “Our services are based on the concept of different productions starting up and shutting down.” In its role as market regulator, Tine has to be able to receive and supply whatever milk is needed by the domestic market. “Traditionally, just before the Christmas period and during the Easter Holydays, we receive all the excess milk from the entire region. Our production typically peaks at these times.” Quite an effort, considering the fact that the factory already handles production 24 hours a day, seven days a week.

The test environment where Tine tests its various new production lines is striking to say the least. “It is basically a dairy within a dairy”, Kjetil proudly informs us. “We test our new ideas here and evaluate them afterwards.” This is typical for a cheesemaker who is operating at the top of the market, a market where any company is constantly challenged to reinvent itself.

“That’s the beauty of our trade: there is always something to improve”, says Kjetil. “The industry is constantly developing, and technology keeps improving, which drives us to continuously raise our quality.” There's never a dull day. “Working with skilled people, the right equipment, and the best suppliers adds to the challenge of getting it just right.”

The secret of the cheesemaker

The secret to a great cheese is to only use high quality produce. “You need good raw materials”, the operational director explains. “We only use proprietary bacteria, for example. Our cheeses get their distinct taste due to our use of unique materials, something you can't just buy from a supplier”.

The company also opts to continuously invest in the workforce. Because you can have all the great raw materials you want, but without the craftsman, our distinctive taste will not develop itself. “The chain is as strong as the weakest link and this is why you need to have a tremendously high competence level in your people. They must be able to adjust the production in order to maintain optimal circumstances at all times.”

According to Kjetil, the secret to the perfect cheese lies in finding the right balance between people and technology. “When you are making cheeses, you are constantly combining biology with machines. You need perfect hygiene, and delays are unacceptable, otherwise you risk compromising the final product.” For Kjetil, this is a never ending effort.  “When it comes to Jarlsberg cheese, we are constantly walking a thin red line. We need to get everything spot on, otherwise our cheeses end up in the ditch.”

What really comes to the fore as the interview progresses is Kjetil's immense passion for cheese. And it's no wonder, as his passion was kindled from an early age. “My father was a cheesemaker, and I just followed in his footsteps.” Like his father before him, Kjetil has dedicated his life to making the perfect cheese.

“The challenge is making it right and always finding something to improve.” And passion is key for this. “It’s definitely something that you absolutely need to be passionate about. Because passion helps you to master the art, without it you would be nothing but mediocre. You must have a genuine interest and a heartfelt passion to succeed in this line of work.”

In Norway the Jarlsberg-cheese received its greatest compliment when the manufacturer of the frozen pizza, Grandiosa, selected Jarlsberg as its primary topping. Real cheese, not the analogue cheese many other manufacturers use for their frozen pizzas. “To this day, the Grandiosa uses our cheeses, and it is the best-selling frozen pizza in Norway. It is common knowledge here that other pizzas in the supermarket don’t use real cheeses, but the general public is very much aware of the Jarlsberg-Grandiosa connection.”

The pizza is known for striking a perfect balance between a tasty flavour and an affordable price.. “The connection with the Grandiosa-pizza has ensured that when Norwegians think of Jarlsberg, they think of high-quality cheese. ”The success of the Grandiosa is closely linked to the quality of the cheese, I would say.”