A story about how the United States are slowly embracing traditional Dutch Gouda.

Cheesemaker Marieke Penterman grew up on a dairy farm in the Netherlands. After relocating to the United States she realised how much she missed traditional Dutch cheese. Eventually she decided to start her own factory – an opportunity made possible due to the fact that her husband Rolf owns and runs a dairy farm in Wisconsin.

We paid her a visit in her cheese factory in the United States.

Our destination is Thorp, a small Wisconsin town in the heartlands of America. When we look down from the airplane window, we see nothing to confirm the prejudices of a heavily populated country. In Wisconsin, tranquillity prevails. Towns are small, pastures are huge, and gigantic metropolises are nowhere to be seen. The farms though, they're gigantic. In contrast to European farms and their hundred or so cows, herds of five hundred are commonplace in Wisconsin.

One of those massive farms belongs to Marieke and Rolf Penterman, our final stop. The couple met in Canada, married in The Netherlands, and started a dairy farm in the USA with an authentic Dutch cheese factory: Marieke Gouda. “When I started the project, nobody had a clue what Gouda cheese was", Marieke remembers. “Our neighbour asked us back then whether there would be enough Dutch people to buy our cheese.” That did not deter her from her plans. “America is a Cheddar and Colby country. Gouda is not what you would call a household name, it is more of an indulgence, a delicious snack for a party. But I was certain there would be a market for our cheese."

All the milk comes from our 450 cows that dot the landscape of our farm. An underground pipeline runs from the milking shed to the cheese vats, and this transports the milk directly after milking. “The quality of the milk is key to whether the raw milk cheeses are a success or failure. We are lucky to have the cows on the same place as where we make the cheese: milk is within reach. We use the underground pipeline and the advantage of this is that we minimize temperature fluctuations and transport disruptions in this way. This is a benefit for the milk quality”

A brilliant idea but the laying of an underground pipeline stirred up some resistance at the American health inspection for dairy, the FDA. “The inspector found it very difficult to accept the fact that he could not get to the milk to inspect it, and he demanded the pipeline run above ground.” This of course resulted in a lot of dialogue flowing between Marieke, the inspection service, the plumber and the electrician. Finally, the farm and the FDA settled on a compromise. Now the underground pipeline conveys thousands of litres of milk each day.

Marieke soon noticed that there was a huge difference between European and American cheese cultures. Gouda cheeses are made according to an age-old approach, and a large part of the craft processes are not common usage in America. They are sometimes even prohibited. "American cheeses are matured in refrigerators resting on stainless steel. While a Gouda cheese matures on a shelf at temperatures between 12 and 15 degrees Celsius with high humidity. This really opened the discussion floodgates between the farm and the inspector.”

However, Marieke held firm even when this raised eyebrows. “This again became a point of contention when Listeria bacteria was discovered in New York a couple of years back. They would really prefer everything to be pasteurised, but the raw milk suits us and our customers.” Marieke's firm stance just means she has to talk a lot with the inspectors, and forward many samples to the laboratories for testing. Relations have improved since then. “There has been a positive shift recently in what raw milk cheese makers are allowed to do, even though they still keep an eye on us."

Looking back, some of the regulations can seem quite amusing to Marieke. “In Europe, we release the cheese based on flavour profile, but in America there is a mandatory 60-day waiting period. What's strange here is that they have stricter regulations for the end product and not for the beginning of the product. Milk can be stored in a silo for 72 hours but there is no requirement for when you have to process the milk. For instance, one could pump the milk to another silo and store it there for another 72 hours. Weird? Yeah, a little bit all right."

Our factory rolls out 150,000 kilos of cheese each year. Our cheese is now eaten across America, but that did not happen overnight. "Cheesemaking has other challenges than dairy farming. It's true you can determine your own price but you don't have someone coming by to pick up your product every other week.”

Right at the beginning, just getting the cash flow in order is a real energy drain, Marieke explains. "You have got to market every pound of cheese you make yourself. This was why I decided to get someone in who would just look after the market side of things. You know, to do the cold calling and drum up potential customers. Cheese shops, cruises, organisers of meetings as well as distributors. Currently, 65 percent of our sales is conducted via this network while our shop makes up the rest."

The cheese shop on the farm is a popular attraction that draws more than 150.000 people each year from different regions, sometimes from as far away as Chicago. “That wasn't our intention at the start”, says Marieke. “It just happened that way. All I wanted was to sell some cheese at the farm. But food and people go hand-in-hand it seems”, she says.

And the numbers back that up. That typical Wisconsin farm scent hangs over the restaurant: the scent of the countryside mixed with delicious food. Everywhere in the shop, there are samples of cheese to taste, and it is happy hour in lunch room with cheese - what else - topping the bill. Marieke greets her guests and is proud of the pull effect of her cheese shop. “The people from the town are really proud of our work and are actually becoming true Gouda cheese connoisseurs.” 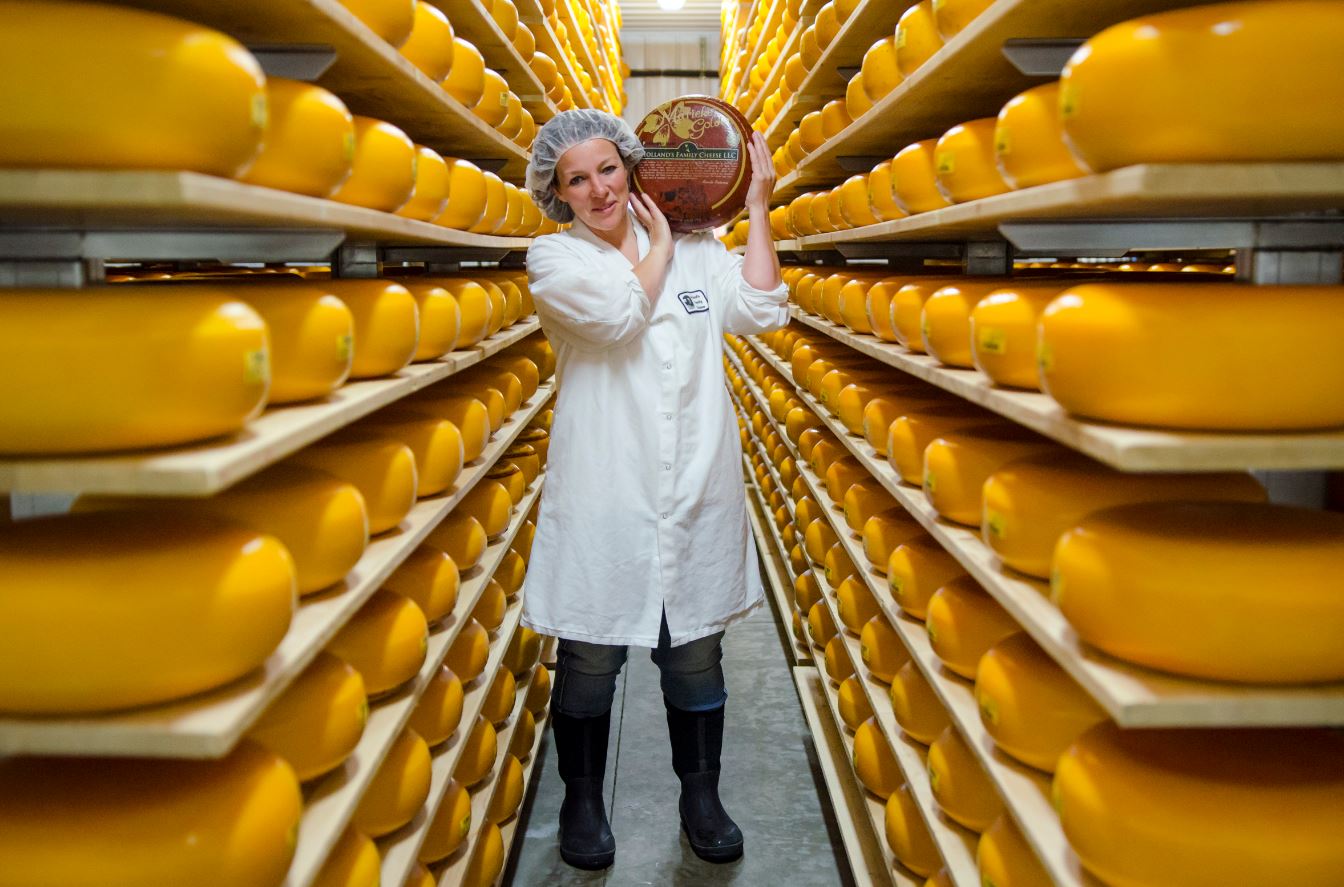